This tree from the East Indies is widely planted for shade, ornament, and nuts around the world, especially along tropical sandy seashores, and has become naturalized. It is characterized by horizontal branches in circles or tiers at different levels on the trunk, large leathery leaves broadest toward (), turning reddish before failing, and the slightly flattened greenish or reddish about 2 inches (5 ) long containing a large edible seed or nut inside the hard husk. 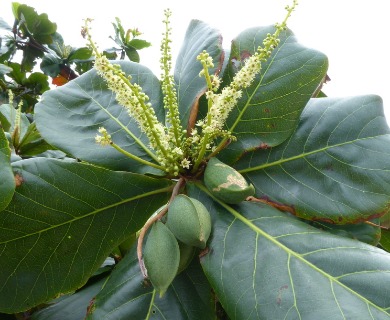 ©2018 Zoya Akulova
Usually a small to medium-sized tree 30–50 ft (9–15 ) high and 1 ft (0.3 ) in trunk diameter, but sometimes much larger in diameter and with slight buttresses, except in areas with a marked dry season. Bark gray, smoothish, thin, becoming slightly fissured. Inner bark is pinkish brown, slightly bitter and astringent. Twigs brown, finely hairy when young, slender but swollen at leaf scars and

Leaves but are crowded near the ends of twigs, with stout finely brown hairy leaf-stalks of 3⁄8–3⁄4 inch (1–2 ). Blades 6–11 inches (15–28 ) long and 3 1⁄2–6 inches (9–15 ) broad, abruptly short-pointed or rounded at and gradually narrowed toward rounded base, not on edges, slightly thickened, upper surface shiny green or dark green and hairless, and lower surface paler and often finely brown hairy.

Flower clusters (narrow ) at leaf bases are 2–6 inches (5–15 ) long. Flowers numerous small greenish white, 3⁄16–1⁄4 inch (5–6 ) across, mostly shortstalked, with slightly unpleasant odor, mostly male and a few flowers near base (polygamous). Both kinds have a greenish white or light brown hairy with a cup-shaped tube and five or six pointed spreading 1⁄16 inch (1.5 ) long and bearing twice as many small near the base. and female flowers, which are stalkless, have a slender and a narrow tube () 3⁄16 inch (5 ) long, brownish green and finely hairy, resembling a stalk but containing the inferior single-celled

() are about 1 inch (2.5 ) broad, pointed, slightly flattened and with one or two narrowly winged edges, light brown at maturity. The thin outer layer is slightly sour and can be eaten. Inside the hard fibrous husk there is a light brown, thick hard stone containing an oily seed or nut about 1 1⁄4 inches (3 ) long and 3⁄8 inch (1 ) broad, somewhat like the true almond. Flowering and fruiting nearly through the year.

The heartwood is reddish brown when first cut, becoming pale brown with age and has a subdued figure imparted by dark banding at the terminus of each growth ring. The sapwood is lighter in color. The wood is hard, moderately heavy ( gr. 0.59), moderately strong, tough, medium to coarse-textured, and with and often interlocked grain. It is very susceptible to attack by dry-wood termites. Rate of air-seasoning is rapid, and the amount of degradation is moderate. Machining characteristics are as follows: plaining is very poor; shaping, boring, and mortising are fair; turning is poor; and sanding and resistance to screw splitting are good.

The wood has been used occasionally as a substitute of kamani (Calophyllum inophyllum), in Hawaii’s craftwood trade. However, it is considered inferior in appearance and is very susceptible to attack by lyctus and ambrosia beetles when stored in large pieces awaiting carving. Common uses elsewhere are for posts and fuel. This attractive wood if carefully handled in machining would be suitable for millwork, furniture, veneer, and cabinet work. It has been recommended for boatbuilding, general construction, bridge timbers, crossties, flooring, and boxes and crates.

The bark, roots, astringent green and leaves contain tannin and have been used in tanning. A black dye serving for ink has been obtained from bark, and foliage also. An oil has been extracted from the seeds.

This species is extensively planted and is naturalized along seashores, being hardy and salt tolerant, though reportedly not resistant to hurricanes or strong winds. It is an attractive roadside tree for its peculiar branching and reddish tinged old leaves and grows rapidly. Introduced very early in Hawaii, probably before 1800, and now naturalized at low altitudes, mainly near shores.

Range
Native of East Indies and Oceania but planted and naturalized through the tropics, including southern Florida and Puerto Rico and Virgin Islands.

node -- The point at which there is attached growth, as in the place where each leaf is attached.

Flowers with both stamens and pistils are bisexual. Also called "perfect flowers".

elliptic -- Oval, with no point or a very short point.

A raceme is an unbranched, indeterminate type of inflorescence bearing flowers having short floral stalks along its axis.