This species with its red, sometimes pink or white, pear-shaped of apple-like color undoubtedly was introduced by the early Hawaiians. It has large pretty, purplish red or rose purple flowers (sometimes whitish) composed of a mass of many threadlike 2 1⁄2–3 inches (6–7.5 ) across, spreading like pins in a pin cushion, which drop to form a purplish red carpet on the ground beneath. 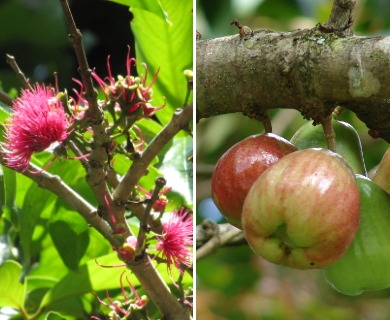 Sapwood light brown, heartwood reddish brown, straight-grained, and fine-textured. Wood is described as hard, tough, very heavy, tending to warp and difficult to work. Hawaiians hewed the trunks into posts, rafters for houses, and enclosures for temples. Religious images were carved from the wood, which was regarded as sacred. A tea brewed from bark was used as a sore remedy.

Widely cultivated through the tropics. are eaten raw, cooked, or preserved. It is said that the slightly sour are good in salads. Elsewhere astringent bark, flowers, and leaves have been used in folk remedies.

An attractive ornamental and shade tree, planted elsewhere for windbreaks. One author places it among the most beautiful flowering trees of the tropics. Easily propagated from seeds, it has moderately rapid growth. are produced in 7–8 years.

The Malaysian apple was introduced into Jamaica in 1793 from Tahiti by Captain William Bligh of the British ship Providence. This, along with breadfruit, was one of several trees brought in to provide inexpensive food for slaves.

Naturalized in moist lowland forests through the Hawaiian Islands, mainly on windward sides in valleys and gorges. It forms almost pure stands to about 1800 ft (549 in) altitude. Accessible groves on Oahu are in Waimano Gulch and Sacred Falls Valley (Kaliuwaa), also along Trail Number 1 in upper Makiki Valley and Kahana Valley. The form with white flowers and rare on Oahu, was named ‘ōhi‘a‘ai hua keokeo or ‘ōhi‘a kea.

In Puerto Rico and Virgin islands, trees are grown around buildings as ornamentals, also occasionally for windbreaks. Uncommon in southern Florida.

throat -- The opening of a flower.

cyme -- Multiple flower stalks emerge from a single point and the flowers at the end bloom first.

The anther is a pad at the end of the stamen that holds the pollen.