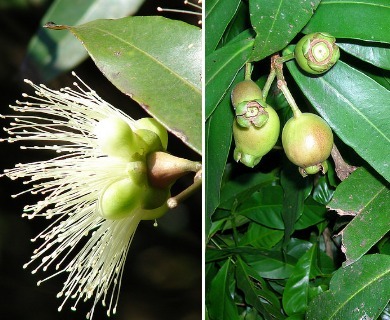 Wood dull brown, hard, and heavy ( gr. 0.7). Not durable in soil and very susceptible to attack by drywood termites. Seldom used. Elsewhere, coarse baskets and barrel hoops have been made from young branches and poles from larger limbs.

Planted in the tropics for ornament, primarily for the showy flowers and handsome foliage. Sometimes used for windbreaks and shade. Occasionally, the insipid are made into jellies, preserves, and salads; it is a good honey plant. Elsewhere seeds and roots are utilized in home remedies. Trees reproduce naturally from seeds and sprout vigorously when cut. Shade beneath pure thickets generally kills out all vegetation.

Planted and sparsely naturalized through the Hawaiian Islands in moist areas such as pastures, waste places, and stream banks, from sea level to 1600 ft (488 ), rarely to 4000 ft (1,219 ) altitude. Usually found as an understory tree in mixture with guava (Psidium guajava). Classed as a weed.

Range
Native of southeastern tropical Asia but now widely cultivated and naturalized through the tropics, including Puerto Rico and Virgin Islands. Planted also in Florida and southern California. Introduced into Hawaii about 1825, apparently for the edible though insipid aromatic

corymb -- a much-branched inflorescence with the lower flowers having long stems.