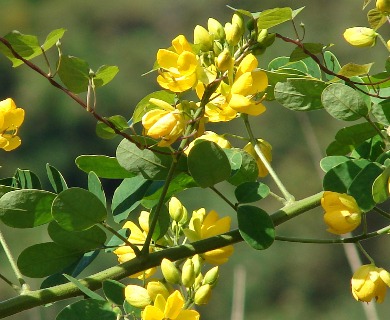 The sapwood is light brown and the heartwood dark brown. The wood is heavy ( gr. 0.75) and hard. It has a beautiful figure on flat-sawn faces imparted by prominent parenchyma tissue that is reminiscent of a pheasant’s tail, causing the wood frequently to be called “pheasant wood.” The wood, which is very susceptible to attack by dry-wood termites, is used for small turnery and carvings and is very popular. Elsewhere, it is employed for posts, fuel, construction, furniture, and similar purposes. Tannin has been extracted from the bark.

Only about 1500 trees have been planted in the Forest Reserves, almost all on Oahu. It is not commonly planted now as an ornamental because of the messy appearance of its pods. However, many old trees are still seen along roads and in old gardens. A prime example is a labeled tree near the ewa-makai gate of Iolani Palace grounds.

The species has been widely planted in Puerto Rico and the Virgin Islands in recent years for ornament, shade, and windbreaks. The trees form good windbreaks because they retain a deep closed They are propagated by seeds, grow very rapidly in full sunlight, and are suitable for fuel within a few years. However, they are very susceptible to attack by insects there.

The seeds, pods, and foliage are toxic to hogs and cause death quickly after being eaten. As hogs relish the poisonous leaves, farmers in Puerto Rico have suffered losses. Trees blown over or broken by storms increase the danger. Thus, swine and perhaps other livestock should be kept away from these trees.

Planted in lowlands, especially along roadsides in Hawaii and escaping. Introduced about 1865.

This species is known for its showy flowers in late summer after most legumes cease blooming. However, other species are generally more attractive.

In regular flowers all parts of the flower are similar in size and arrangement. Symeteric.