This attractive introduced ornamental shrub or small tree has become widely naturalized and is a weed. It has leaves with narrowly winged axis and five, seven, or nine shiny clusters of small white flowers, and many bright red poisonous 3⁄16 inch (5 ) in diameter. The aromatic resinous sap produces a rash or dermatitis in some persons. 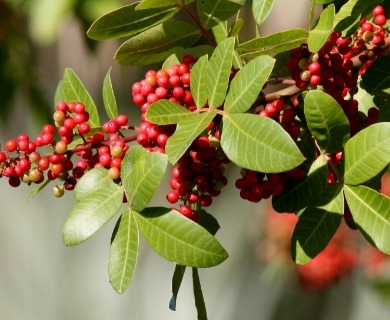 Flower clusters () mostly at the base of upper leaves, 1–4 inches (2.5–10 ) long, much branched, composed of many short-stalked flowers, partly male and female on different plants (). Flower about 1⁄8 inch (3 ) long and broad consists of of five tiny pointed green of five spreading white petals less than 1⁄8 inch (3 ) long; 10 attached at base of large ring-shaped and with rounded short and dot

() are many in dense clusters, bright red, with at base and dot at with aromatic resinous brown pulp, slightly bitter. Seed single, elliptical, light brown, less than 1⁄8 inch (3 ) long. Female plants produce abundant which mature mostly in autumn and remain attached until December.

The hard, heavy, reddish brown wood is utilized in Hawaii only as firewood and chipped mulch from trees cut during land clearing.

Fruiting branches are picked for making Christmas wreaths and decorations. Classed as a honey plant.

Christmas- was introduced into Hawaii before 1911 as an ornamental. Later, it was planted extensively through the islands for the bright red berries and shiny foliage used in Christmas decorations. It has escaped widely in dry lowlands and now is classed as an undesirable weed. It is very common in Ka‘u and North Kona on Hawaii, southeastern Maui, and on Oahu near Mokuleia.

Range
Native of southern Brazil, Paraguay, and Argentina. Introduced northward to the southern border of continental United States and in Old World tropics.

Spreading rapidly as a weed in southern Florida and known there as “Florida-holly.” Planted also as an ornamental in southern California, southern Arizona, Puerto Rico, and Virgin Islands.

The Hawaiian name wilelaiki, according to Neal, refers to Willie Rice, a politician, who often wore a hat lei of the berries.

Some people are sensitive to the resinous sap, which produces a rash or dermatitis. Pollen may cause sneezing and headaches, and the are poisonous.

disc flowers are those in the center of a sunflower or daisy. Not a ray flower.

dioecious -- When male and female reproductive structures are on separate plants.

The botanical term "berry" is different from common usage. Strawberries and raspberries are not berries. But a tomatoe is. A true berry is a fruit with the seeds immersed in the pulp.