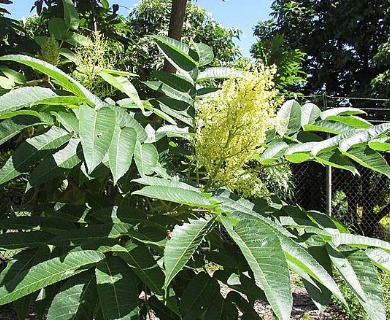 ©2015 Forest And Kim Starr
Leaves large, 12–18 inches (30–46 ) long, with yellow green hairy axis round and enlarged at base, not winged. mostly 11–15, paired and almost stalkless except one at end, lance-shaped or oblong, 2–4 inches (5–10 ) long and 1–2 inches (2.5–5 ) wide, long-pointed at rounded and unequal-sided at base, wavy thin, with many nearly straight side veins raised beneath, above dull green and almost hairless, beneath paler and finely hairy, red when young and again turning red before falling.

Flower clusters () are erect, very large, 6–12 inches (15–30 ) long, much branched, and finely hairy. Flowers very numerous, crowded, small, about 1⁄8 inch (3 ) long and broad, short-stalked, pale yellow, composed of of five hairy green united at base, of five petals spreading and turned back, five and with and two or three short

The wood is described as yellowish gray with dark resinous streaks, lightweight, coarse-textured, and tough. It has been used for saddle trees on Hawaiian ranches. Formerly, it served for ox yokes and plows. The bark has been used locally for tanning goat skins. According to Degener, a keg of bark was shipped to Boston in 1868. Again in 1918, commercial use was considered but was abandoned because of a fungal disease that killed some plants. The shrubs are showy and ornamental.

Neneleau is found in the lowland forest zone at 600–2000 ft (183–6190 ) elevation or above. Common on the island of Hawaii and uncommon and in scattered or isolated thickets in Kauai, Oahu, Molokai, and Maui. It is common along highways near Hilo, Hawaii, and along the Hamakua coast.

This is the only native Hawaiian representative of its family. Several introduced species are better known.

The Hawaiian plants have been treated also as a variety of the Asiatic species Chinese sumac, Rhus chinensis Mill., which ranges from Japan through southern China to India. That species differs in that the leaf axes are winged and it has larger red 5⁄16 inch (8 ) in diameter, reported to be edible.

A leaf is compound when multiple leaflets are on the same stem.

deciduous plants are those that lose all of their leaves for part of the year.