Guava is an shrub or small tree cultivated for its rounded yellow edible and widely naturalized as a weed tree in lowland thickets. It differs from strawberry guava (Psidium cattleianum), in the larger flowers, larger yellow and in thinner leaves with many sunken parallel side veins. 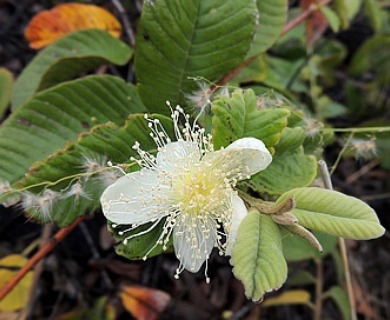 Leaves with short broad leaf-stalks of 1⁄8– 1⁄4 inch (3–6 ). Blades oblong or elliptical, 2–4 inches (5–10 ) long and 1–2 inches (2.5–5 ) wide, short-pointed or rounded at both ends, slightly thickened and leathery, with edges a little turned under. Upper surface green or yellow green, dull or slightly shiny, almost hairless at maturity, with many sunken parallel side veins, and lower surface paler, finely hairy, with side veins raised, and with tiny -dots visible under a lens.

(berries) are rounded or sometimes pear-shaped, yellow, 1 1⁄4–2 inches (3–5 ) in diameter and as much as 3 inches (7.5 ) long, smooth or slightly rough, with 4–5 at with strong mellow odor at maturity, edible. Outer layer thin, yellow, slightly sour or sweet, and juicy pinkish or yellow pulp. Seeds are many, elliptical, more than 1⁄8 inch (3 ) long, yellow. Sapwood light brown, heartwood reddish brown.

The hard, strong, heavy wood ( gr. 0.8) has been used for tool handles, implements, and charcoal. Elsewhere, the bark has been employed in tanning. Extracts from leaves, bark, roots, and buds have served in folk medicine. Hawaiians made a medicinal tea from leaf buds.

Commonly cultivated through the tropics for the which are unusually rich in vitamin C. can be eaten raw, although the pulp is many seeded. Guava paste, jelly, preserves, and juice are prepared from the fresh and guava powder from dehydrated

Several horticultural varieties have been named. Hawaiians distinguished a few by their according to Neal: kuawa-lemi or lemon guava with pink pulp; kuawa-ke‘oke‘o with whitish pulp; and kuawea-momona with larger seeds, sweet pink pulp, and thicker skin. Guava plants are propagated by root and stem cuttings. They begin to bear at 3–4 years, are best at 15–25, and die at about 50.

Guava was introduced into Hawaii early in the 19th century, apparently by Don Marin. The oriental and Mediterranean flies and melon flies, which infest about half of the came later.

In Hawaii, guava is planted and abundantly naturalized through the islands. Classed as an undesirable weed in pastures, rangelands, and waste places. More than a century ago, Hillebrand (1888, p. 130), who left Hawaii in 1871, noted that guava had “spread over many parts of the islands, in some valleys forming close thickets, to the exclusion of every other shrub or tree.”

The seeds are scattered by cattle, wild hogs, and birds. Guava thickets in pastures destroy forage plants. Eradication is difficult because of root sprouts. In the late 1800s firewood gatherers on the windward side of Oahu were stopped from cutting guava, the principal fuelwood, because the cutting caused extensive root sprouting and spread of the plants in pastures.

Range
Native of tropical America, probably from southern Mexico to South America, the range greatly extended through cultivation in tropical and subtropical regions of the world. Naturalized in southern Florida and Puerto Rico and Virgin Islands, and planted in California.