Hawaii has only a single group of native palms, medium-sized fanpalms of the Pritchardia. They are found in moist or dry forests from the coast almost to 4000 ft (1219 ). This is characterized by fan-shaped or wedge-shaped leaves, smoothish trunk with horizontal lines, and absence of spines. A generalized description of the group follows. 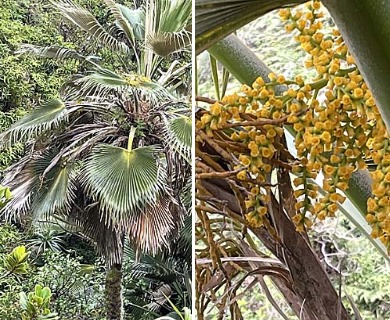 Leaves crowded and spreading at top of trunk, very large, coarse, about 15–30, composed of stout, spineless gray green leafstalk about 3 ft (0.9 ) long and fan-shaped or wedge-shaped about 3 ft (0.9 ) in diameter, folded and divided toward edges into many narrow, thick and leathery segments, with many fine longitudinal lines of parallel veins. The upper surface is green and the lower surface varies in different species from green and almost hairless to whitish and waxy or silvery and densely hairy. Older dead leaves hang down and are often

Flower clusters () single at leaf bases, about 2 ft (0.6 ) long, composed of a long stout stalk covered with large gray or straw-colored and many light green to yellowish branches, hairless or densely hairy. Flowers many, with slight odor of cheese, stalkless, small, about 1⁄2 inch (13 ) long and broad, composed of greenish cuplike base with three- three narrow petals that fall upon opening, six spreading united at base into cup, and with three-celled. and short

() many, nearly stalkless, hanging down, round or elliptical, varying in size in different species, 1⁄2–2 inches (13 –5 ) long, with point from at shiny green and turning to black, sometimes yellowish, with fibrous outer wall and hard inner wall. Seed single, round or oblong, brown, 1 inch (2.5 ) or less in length, white within, soft and edible when immature, becoming hard.

The main use of these native Hawaiian palms is as ornamentals. A few species are in cultivation here and elsewhere in the tropics. Formerly, the Hawaiians made hats from the young leaves and used the mature leaves for thatching and fans. The immature soft seeds, which have a taste slightly like coconut, were eaten. Domestic animals and rats feed on the seeds, and wild hogs also dig up and devour young plants. Formerly, the trunks were used to make fences.

The native palms of this are mostly distributed in the wet forests of the six large islands chiefly at about 2000–3000 ft (610–914 ) altitude, sometimes higher, and in dry forest at sea level. One species is found on Nihoa, a very small island 150 miles (241 km) northwest of Kauai. An extinct one is recorded from Laysan.

The Pritchardia, according to an early monograph (Beccari and Rock 1921), had about 31 named species of fanpalms, nearly all confined to Hawaii except for about 5 in Fiji and other South Pacific islands. Many very localized forms in Hawaii probably are varieties of very few species, according to Fosberg and Herbst (1975). Robert W. Read (pers. comm.) recognizes 18 species in Hawaii as a result of a revision for the Manual of Flowering Plants of Hawaii. A few are rare and have been proposed as endangered. Most native species have a local range within a single island. Variation is great, even within one plant in different years.

The name honors William T. Pritchard, author of Polynesian Reminiscences and British Consul in Fiji, where the first species was named in 1861. That species, Pritchardia pacifica Seem. & H. Wendl., Fiji fanpalm, is an introduced ornamental in Hawaii.

blade -- Just the flat part of a leaf. Not the stem.