This introduced ornamental has escaped from gardens and become naturalized as a weed, forming impenetrable thickets. It has large showy flowers 3–4 inches (7.5–10 ) across the five spreading violet or purple petals. Distinguished also by the paired elliptical, velvety hairy leaves with five main veins from base. 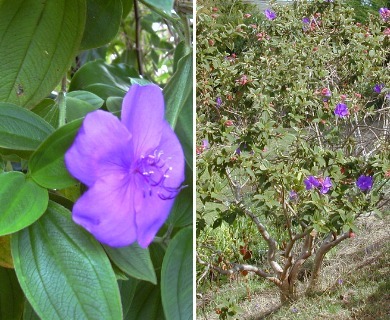 is an egg-shaped pale brownish 5⁄16 inch (8 ) long, five-celled, with many small round seeds.

The wood is reddish brown, hard, strong, and difficult to cut. Not used.

This species has become naturalized and is classed as a weed in pastures and wastelands. It forms dense thickets by spreading vegetatively from roots, and cut branches also bear roots and grow.

Scattered, forming impenetrable tangles in moist open forests and roadsides at 1500–4000 ft (457–1219 ) altitude, especially in the Volcano area of the island of Hawaii.

Range
Naturalized through the Hawaiian Islands from Kauai and Oahu to Hawaii. Native of Brazil (Rio de Janeiro and Rio Grande do Sul) and widely cultivated as an ornamental.

Degener (1930) stated that it was introduced in about 1910 from South America, traced to an estate near Kurtistown, Hawaii. The first herbarium specimen was collected by Rock in August 1917 at Kalanilehua, Kilauea, Hawaii. It was spread by amateur horticulturists who took cuttings to their gardens. By 1930 this weed was observed in a garden near Honolulu. At that time Degener predicted the spread and also the replacement of native vegetation, which has since occurred. As he observed in 1970, this species exemplifies the difficulty of eradicating ornamentals cultivated in the islands that become weeds.

Two additional shrubby naturalized species in this family have become weeds. Koster’s curse, Clidemia hirta (L.) D. Don, has small white flowers and small blackish or purplish edible berries. Melastoma candidum D. Don ( melabathricum auth., not L.) has large pink to purple flowers and small bristly berrylike They are of no forage value and may be found in wastelands, pastures, and lowland forests.

node -- The point at which there is attached growth, as in the place where each leaf is attached.

A noxious weed is considered to be harmful to the environment or animals. Often a governing body designates plants as noxious.

Bracts are modified leaves associated with a flower.

The anther is a pad at the end of the stamen that holds the pollen.

capsule -- a type of simple, dry fruit produced by many species of flowering plants. In most cases the capsule splits apart to release seeds.