This variable species is an example of its which has about 10 Hawaiian species known as hō‘awa, also two naturalized species. Small shrubs or trees with large narrow leathery leaves on stout twigs, many small whitish flowers crowded at the base of leaves, and large rounded or four-angled deeply wrinkled that split open into two parts. 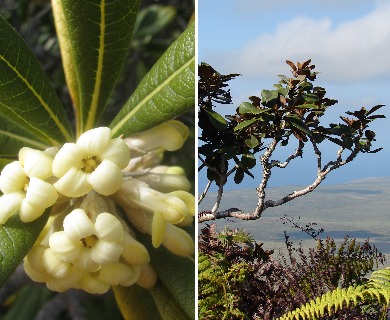 Flower clusters (corymbose ) mostly at leaf bases, about 1 inch (2.5 ) long. Flowers many, fragrant, crowded on short brown hairy stalks, or male and female, about 3⁄8 inch (1 ) long, composed of cup-shaped five- brown hairy about 1⁄4 inch (6 ) long; white with cylindrical tube about 3⁄8 inch (10 ) long with five spreading 1⁄4 inch (6 ) long. Male flowers have 5 attached at the base of the tube and extending beyond. Female flowers have five minute nonfunctioning and a narrow with hairy slightly two- two-celled and containing many ovules, and slender

Rock (1913) observed that the trees in this are very variable and that it is difficult to render the exact limitation of each species. He found capsules of three different “species” on a single twig on the island of Lanai, where the is exceedingly well represented. As there are as many different forms as trees, one would be naming individual trees. Insect pollination is a factor, he concluded.

One native and a few introduced species are planted as ornamentals. In Hawaii, a home remedy was obtained from the pulp of the pounded Plants of another native species, Pittosporum hosmeri Rock, can be seen on the grounds of the Bishop Museum.

perfect flower -- a bisexual flower, having both male and female parts.

A raceme is an unbranched, indeterminate type of inflorescence bearing flowers having short floral stalks along its axis.