Two common and widely distributed species ( lessertiana and sandwicensis) will serve as examples of the Myrsine, of small to medium-sized native trees in which as many as 20 Hawaiian species have been distinguished. In this the leaves generally are many, crowded, narrowly elliptical or lance-shaped and broadest beyond middle, tapering to base and short leafstalk, with -dots visible under a hand lens; many small short-stalked greenish five-parted flowers crowded along twig back of leaves; and many small round, blackish single-seeded (berries). 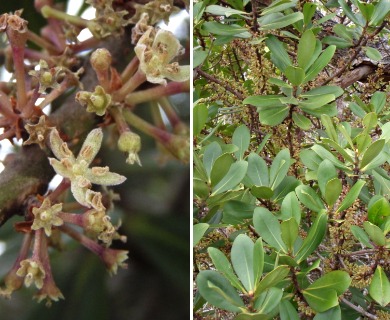 ©2013 Eric White
This species is characterized by larger leaves than others. It is a small or medium-sized tree to 60 ft (18 ) tall and 1–2 ft (0.3–0.6 ) in trunk diameter. Bark light gray, smooth to finely fissured, thick. Inner bark with brown outer layer, pink or red with brown streaks, bitter. Twigs are mostly stout, hairless, green when young, turning gray and becoming warty, with raised half-round leaf-scars, ending in narrow pointed buds of young leaves.

Leaves many, but crowded, hairless, narrowly elliptical, 3 1⁄4–5 1⁄2 inches (8–14 ) long and 1–1 1⁄2 inches (2.5–4 ) wide, slightly thick and leathery or slightly fleshy, blunt to rounded or pointed, base short- to long-pointed, pink when young, tapering at base to short winged greenish or pinkish leafstalk of 1⁄4 inch (6 ) or almost stalkless, upper surface slightly shiny green with inconspicuous veins, lower surface dull light green with many blackish -dots visible under a lens.

Flowers are many, small, about 1⁄8 inch (3 ) long and broad, in groups of 3–7 on short slender stalks of 1⁄4 inch (6 ) along twigs and short spurs back of leaves and at base of oldest leaves. light green, of five pointed of five elliptical yellowish with red dots; five short stalkless attached on and and with conical and almost stalkless

(berries) are round or elliptical, about 1⁄4 inch (6 ) in diameter, turning from green to reddish or black, with at base and pointed at Seed single, round.

The wood is pinkish yellow with prominent reddish brown providing a prominent figure on all surfaces. It is moderately hard, easily worked and polished, and suitable for cabinet work but not used at present. Used by the Hawaiians as timber for houses and anvils on which to beat tapa. A black dye for tapa was made from the charcoal.

This very variable species is widespread through the islands, especially in wet forests and open areas at 700–4000 ft (213–1219 ) altitude.

Rock noted that this species is one of the most variable in the and that two trees are hardly alike. He reported that red sap exudes from cut trunks and formerly served for dyeing tapa or bark cloth.

ray flowers -- The outer petals of a sunflower or daisy are ray flowers.