This species, known only from Kauai, is easily recognized by its strong pleasant fragrance like anise, in all parts, that persists for years. It is a small shrubby tree to 26 ft (8 ) high, with trunk to 10 inches (25 ). Bark gray, smooth, thin. Inner bark with green cap, light yellow, spicy, with strong taste and odor like anise or licorice. Twigs with minute pressed gray hairs when young, soon nearly hairless, with raised half-round leafscars. End bud narrow, composed of paired very young hairy leaves. 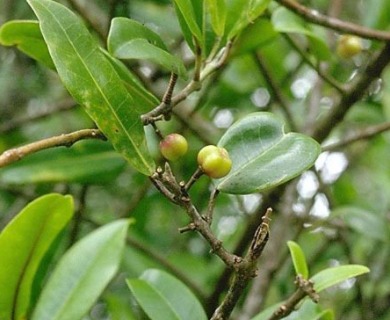 W. L. Wagner, Smithsonian Institution - NMNH - Botany
Leaves paired or with leaf-stalks 1⁄4–1 1⁄2 inches (6–40 ) long, with tiny hairs when young. Blades elliptical, thin, hairless, mostly rounded at both ends or slightly notched at and short-pointed at base, straight on edges, mostly 1 1⁄2–6 inches (4–15 ) long and 1–3 inches (2.5–7.5 ) wide, with several fine side veins nearly at right angle with light green above, paler beneath, with tiny dots visible under a lens.

(capsules) cube-shaped, 3⁄8–1⁄2 inch (10-13 ) broad, light green, hairless, splitting into four parts. Seeds egg-shaped, shiny black, one or two in a part. borne abundantly in early fall, especially in September, as well as in other times of the year.

The seed capsules and wood retain their fragrance for many years and were favorite perfumes of the Hawaiians, often placed in their tapa cloth. The capsules, which are symbolic of the island of Kauai, were gathered and strung into leis. However, fresh and dry capsules can cause a painful irritation on a perspiring neck, even burning through clothing. The skin will redden, blister, and peel. The chemical coumarin in the leaves causes the burning sensation, which can recur later when sensitized skin is moistened by perspiration. The leaves served also in home remedies.

The wood is yellowish white, fine-textured, tough, but rather soft. It was used by the Hawaiians for kapa beaters and for canoe trim and rigging.

Common at altitudes of 2500–4000 ft (762–1219 ) in mountains on Kauai. Collecting capsules for leis has caused the plants to become less common. Also, in the Kokee region, the plants have been crowded out by the introduced Larsen or blackberry (Rubus argutus).

A few species on other islands have similar fragrance, but not so lasting. The fragrances of other species of Melicope, called alani, vary from citrus and anise to root beer scents. Hikers crush the leaves and put them in their pockets.

cyme -- Multiple flower stalks emerge from a single point and the flowers at the end bloom first.

disc flowers are those in the center of a sunflower or daisy. Not a ray flower.

The botanical term "berry" is different from common usage. Strawberries and raspberries are not berries. But a tomatoe is. A true berry is a fruit with the seeds immersed in the pulp.