Paperbark, introduced for ornament and watershed cover, is easily recognized by its odd whitish bark, which splits and peels in many papery layers, by the lance-shaped or narrowly elliptical leaves with mostly five veins from base to and many white flowers with many threadlike crowded and stalkless, suggesting a bottlebrush. Crushed leaves have a resinous odor and taste somewhat like those of eucalyptus. 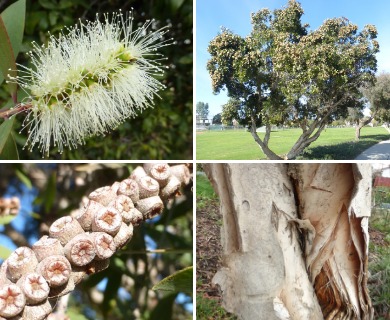 Sapwood is pale brown and heartwood light pinkish brown. Wood heavy ( gr. 0.58) with fine texture. Wood grown in Australia is reputed to be resistant to decay and termites, but these properties have not been evaluated for Hawaii-grown wood. Australian wood ( gr. 0.67) is quite strong in bending, tough, and hard, comparable to somewhat denser eucalypts in these properties. Tests of wood from Florida indicate that it is similar in properties to dogwood (Cornus ). The wood has not been used in Hawaii but should be suitable for fence posts. The problem with utilization is that the inside bark diameter of the stems is generally quite small.

A fast growing hardy tree resistant to wind, drought, fires, and salt water and suitable for windbreaks and beach planting. Propagated from seeds.

The thick papery bark has served elsewhere as packing material for caulking for boats, and as torches. Cajeput oil of medicine is obtained from the leaves and twigs of this and related species by steam distillation.

In Hawaii, the paperbark is grown extensively in pure and mixed forest stands for watershed cover, windbreaks, and as an ornamental. Naturalized, but not a pest as in Florida. Forest fires, which cause the seed pods to open and disseminate the seeds, are rare in Hawaii while common in Florida. The first recorded planting by the Division of Forestry was in 1917 on the land of Luaalaea in Manoa Valley, Oahu. Since then, the paperbark has become the third most commonly planted tree in Hawaii, with more than 1.7 million trees planted in the Forest Reserves, because it thrives on very harsh eroded and wet sites where others do not.

Range
Native from eastern Australia to New Caledonia and Papua, where it grows on coastal flats. Planted and naturalized in tropical regions. Naturalized and very common in southern Florida. Planted also in southern Texas, southern California, and Puerto Rico.