Hawaii has one native tree species related to the American holly of eastern continental United States, which is in the same This handsome tree has elliptical leathery leaves, many small white flowers, and clusters of small rounded black 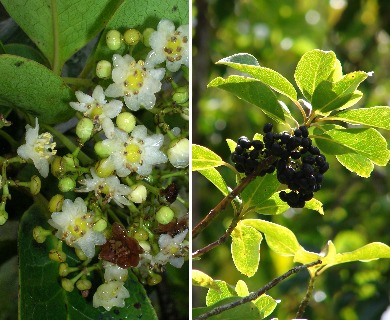 Leaves but partly crowded, with light green leaf-stalks 1⁄4–3⁄4 inch (6–20 ) long, flattened above. Blades elliptical, mostly 1 1⁄2–3 1⁄2 inches (4–9 ) long and 1–2 1⁄2 inches (2.5–6 ) wide, thick, stiff, brittle, and leathery, rounded or blunt at both ends, turned under at edges (rarely with teeth, except on seedlings), above shiny dark green with network of fine veins slightly sunken, beneath dull light green with inconspicuous veins.

Flower clusters (cymose ) 1–3 inches (2.5–7.5 ) long at leaf bases, the long stalk and branches flattened. Flowers are many, short-stalked, from rounded greenish buds, male and female on different plants (), about 1⁄2 inch (13 ) broad. less than 1⁄8 inch (3 ) long, greenish, with 4-5 rounded white, sometimes pink-tinged, composed of short tube and 6–12 widely spreading rounded 1⁄8 inch (3 ) long; as many as attached in notches, white, in female flowers short and not functioning; and with rounded yellow green 12–20-celled no and as many crowded short stigmas as cells, in male flowers small and not functioning.

Wood is whitish, or grayish yellow with lighter colored sapwood, hard. It was prized by the Hawaiians for canoe trimmings and to make the anvil on which bark was beaten into bark cloth or tapa. It has also been used for saddle trees.

Common and widespread in open wet forests through the six larger islands, to 6500 ft (1981 ) altitude.

This very variable species and a few close relatives in Polynesia are classed as the most primitive for the of more than 350 species of wide, mostly tropical distribution. The Marquesan and Tahitian trees are scarcely distinguishable from those of Hawaii.

dioecious -- When male and female reproductive structures are on separate plants.