This familiar symbol of the tropics and especially sandy shores scarcely needs a description. Distinctive characters of the world’s best known palm include the slender, often leaning trunk enlarged at base, smoothish with horizontal rings, and many very long spreading feathery or leaves, and the familiar coconut within a large fibrous husk. The coconut was the official tree of the Territory of Hawaii before statehood. 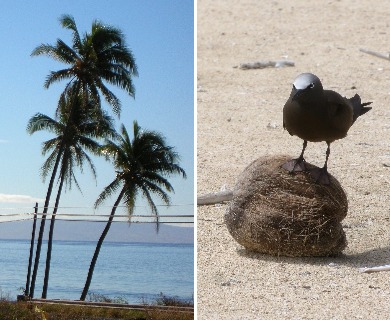 Leaves many, 12–20 ft (3.7–6 ) long, with of coarse brown fibers, long leafstalk, and numerous segments. nearly 2 ft (0.6 ) high on sides of leafstalk, surrounds the trunk and breaks as younger leaves expand. Leafstalk stout, 3–5 ft (0.9–1.5 ) long, yellowish and slightly concave. 9–15 ft (2.7–4.6 ) long and 3–5 ft (0.9–1.5 ) wide, composed of numerous segments spreading regularly in one plane on both sides of the axis. Segments or very narrow (linear), 2–3 1⁄2 ft (0.5–1.1 ) long and 2 inches (5 ) wide, shorter toward long-pointed, leathery, parallel-veined, shiny yellow green above, and dull light green beneath. The lowest dead leaves hang down against the trunk, eventually shedding and forming a smooth ring scar. Generally, coconuts produce an average of 12 leaves per year, and the age of a tree may be estimated by counting the ring scars and dividing by 12. Stem diameter is greatly influenced by vigor of the tree and in recently developed areas in Hawaii trees with a conspicuous constriction in their upper stems may be seen. These constrictions resulted from reduced diameter growth for a period after the full-sized trees were transplanted.

The has an egg-shaped or elliptical light brown fibrous husk 8–12 inches (20–30 ) long, bluntly three-angled and not splitting open. The elliptical or nearly round inner brown with three round spots near the end is essentially a very large hollow seed covered with a hairy outer shell. Inside is a whitish layer of slightly sweet and oily stored food 3⁄8 inch (1 ) thick and a large central cavity containing watery or milky liquid. Flowering and fruiting continuously through the year.

Ranking among the 10 most useful tree species to mankind in the world, coconut is the most important of cultivated palms through the tropics. The are eaten raw, prepared into candies, or shredded with pastries. When immature, the soft jellylike flesh can be eaten with a spoon. The watery liquid of green and the milky juice of mature ones are pure, nutritious, cool, and refreshing drinks. These green are sold on city streets in the tropics. Under the name copra the dried white oily part of ripe is marketed in large quantities for the manufacture of soaps and coconut oil. The latter is used in the preparation of margarine and other foods, and for cooking. The white suspension of grated coconut is an essential sauce in most Polynesian cuisine. Coconut is also classed as a honey plant. The sugary sap collected from cut unopened flower clusters is a fresh beverage known as toddy, and a source of alcohol.

The trunks serve for posts. Walking sticks have been made from the outer layer or ring of the trunk. The inner part is a very soft, light brown pith with scattered reddish brown bundles. The wood of coconut palms from Fiji was tested in New Zealand and found to be marginally useful if handled properly (Alston 1973). Only the wood in the outer part of the stem at the butt is sufficiently dense and strong to be useful. The rest of the stem should be discarded. The wood is difficult to season without collapse and is extremely dulling to saws. It is used only rarely for rafters and house posts on islands where more suitable woods are not available. Two pieces of coconut wood are in the decorative carving on the door behind the thrones in lolani Palace, Honolulu.

Many large coconut plantations or orchards have been established along coast lines of many tropical regions, especially in southern Asia and South Pacific islands. Also, the trees thrive inland where soil moisture is ample, and are hardy in dry climates if irrigated. Trees begin to bear at about 6 years and annually produce 40 or more nuts, which mature in 9 or 10 months. In Hawaii, copra plantations were attempted in several places during the late 1800s. One such plantation is at the Coco Palms Hotel on Kauai. It was found that the trees did not bear as well at Hawaii’s latitude as elsewhere in the Pacific, so the ventures were given up. Dwarf varieties are recommended for ornamental planting around homes, as falling coconuts may be dangerous. Trees in parks and along streets must be kept trimmed of young for this reason. People have been killed by falling nuts in Honolulu. Falling have also caused serious injury.

Early Hawaiians managed groves of coconuts and had many uses for the various parts, as reported by Neal (1965). The leaves served for thatching, baskets, fans, brooms, string, etc. From the fibrous material at leaf bases, sandals and strainers were made. The husks provided sennit, cordage used in fishing, house construction, etc. The leaf buds and pith of trunks were eaten raw. Mature and immature nuts provided food and drink. Coconut oil was used for light, ointment, and hair oil. The shells were made into utensils and implements. The hard outer part of the trunk served as wood for posts, furniture, construction, and spears. The sweet sap of flowering buds was tapped as a source of sugar, wine, and vinegar. Throughout the Hawaiian Islands, as elsewhere through the tropics, coconut palms line sandy beaches and have been planted along streets and in parks. The pre-European variety used by the Hawaiians is distinctly more slender-stemmed for its height than the more recently introduced varieties. This variety is still common in such places as Keanae and Hana, Maui, and may also be seen on all islands in older settlements.

Range
Native land apparently Indian Ocean region. Now thoroughly naturalized on tropical shores of the world. Growing naturally and in cultivation through the Hawaiian Islands, in southern Florida, and in Puerto Rico and Virgin Islands.

Wherever its place of origin, coconut apparently has spread naturally by means of the large lightweight husks and waterproof shells. The seeds are able to germinate after floating in salt water for a few months. Whether the coconut arrived in Hawaii before the first human inhabitants is uncertain. If not native, this species has become thoroughly naturalized as though wild.

Reports that this species was native or pre-Columbian in the New World, such as on the Pacific coast of Rica and Panama, have been rejected. Columbus did not find coconut, and early Spanish writers in the New World did not mention it. However, this valuable palm apparently reached Puerto Rico within a century after discovery in 1493.

Both the common and scientific names apparently are derived from Portuguese coco, a word adopted in European literature. It is said that the meaning refers to the resemblance of the with its three spots to an ape’s face.

Coconut is one of the largest seeds known. It is surpassed only by the one-seeded two- weighing up to 50 pounds (22.7 kg) of the double-coconut (Lodoicea maldivica (Gmel.) Pers.), a tall fan palm native to the Seychelles Islands in the Indian Ocean, which may be seen at Foster Botanic Garden.

sheath -- a tubular or rolled part of an organ, e.g. the lower part of the leaf in most grasses.

monoecious -- all flowers have both sexes; or both sexes in different flowers on the same plant.

frond -- a large, divided leaf. The leaves of most ferns are fronds.

blade -- Just the flat part of a leaf. Not the stem.