This treefern is widespread in wet forests and is the most common species on the island of Hawaii. It is distinguished by the smooth leaf-stalks with masses of shiny golden brown, soft hairlike on the enlarged base and lower part. Also, the leaf branches (pinnules) are stalkless, the leaf segments divided to and beneath whitish and hairless, and the lowest pair of leaf segments common with earlike and overlapping the axis. 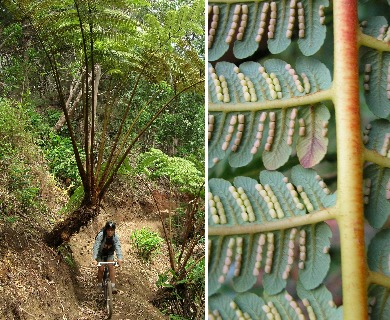 The main product of this treefern was pulu, the dense soft cover of glossy, of hairs at the base of young coiled leaves. Pulu served the Hawaiians as an absorbent surgical dressing and in embalming the dead. This “wool” was harvested, often by cutting down the larger plants, and exported mainly to California for stuffing mattresses and pillows. According to Degener (1930), the harvest was extensive by 1859, rose to the maximum export of almost 623,000 pounds in 1869, and ended by 1885. Because it becomes matted, breaks into powder, and absorbs moisture, pulu was replaced by other fibers. About 1920, treeferns were cut for the starch in their trunks, which was used for laundry and cooking. However, that industry was short-lived.

This species propagates by trunk buds as well as It grows well in shady, damp gardens at sea level and is often used as an ornamental. The other species do not survive at sea level.

spores are produced by ferns, horsetails, and other primitive plants. Spores are like tiny seeds, but they lack food for the plant embryo. Because spores are easily carried aloft by the wind, they allow ferns and horsetails to reproduce asexually across considerable distances.

pinnae -- the primary segments of a compound leaf.

frond -- a large, divided leaf. The leaves of most ferns are fronds.

A stipe is a small stalk that supports some other structure. In ferns, the stalk of a frond; generally a small stalk.

sporangium is the enclosure in which spores are formed.

silky -- Covered with fine soft hairs, with a lustrous sheen. Satiny to the touch.