This is a large, introduced, tree with straight axis, branches horizontal or slightly drooping, in rings, narrow columnar and both awl-shaped and scalelike leaves. To 130 ft (39 ) or more in height and 3 ft (0.9 ) in trunk diameter. Bark gray, rough, thick, with horizontal cracks, resinous. Branches are with twigs spreading in one plane. Twigs long and very slender, shedding. 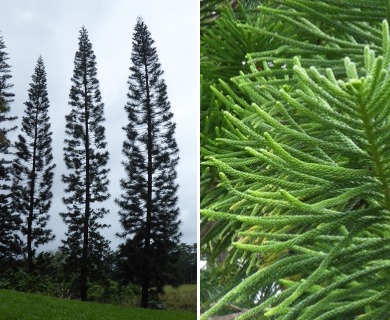 The wood is a lustrous straw color. Tests of clear wood at the USDA Forest Service, Forest Products Laboratory have indicated that it has a strength approximately equal to that of Rocky Mountain Douglas-fir (Pseudotsuga menziesii). The lightweight wood ( gr. 0.44) is rarely available knot-free. It is used for attractive knotty pine paneling, turned bowls, and bracelets. For a short period when Hawaii had a veneer plant, it was used as veneer.

This tree is present on all islands, commonly known as “Norfolk-Island-pine” in Hawaii (see below). It may be seen above St. Louis Heights in Honolulu, at Schofield Barracks, and in Waiahole Valley on Oahu, at Lanai City, at Mahinahina near Lahaina, Maui, and at many other locations. Nearly 2 million board feet of this species have been cut on Hawaii and Maui for lumber and veneer production. It is also planted extensively in Christmas tree plantations and was in the recent past exported to the West Coast as a novelty Christmas tree.

Range
Native of New Caledonia and Isle of Pines

Hawaii is a leader in supplying seed of “Norfolk-Islandpine” to other parts of the world. The seed supplied is A. columnaris rather than A. heterophylla, although possibly a little may be hybridized. Hybridization is unlikely because the two species shed pollen 6 months apart. Seed and foliage samples sent to Kew Gardens were all identified as A. columnaris. The very high percentage of albinism in the Hawaiian seed indicates serious inbreeding.

Identification of the seed is important. Araucaria columnaris does not grow with the erect habit that it attains in Hawaii and in its native New Caledonia when it is used as an ornamental in parts of Florida and Queensland, Australia. At those places, and perhaps others, it produced trees with very crooked, undesirable stems, and has a poor reputation for that reason.

It is said that, when discovered by Captain James Cook in New Caledonia, the tall trees resembled pillars or columns of basalt from a distance. In its native habitat, but rarely in Hawaii, the lower branches shed and are replaced by short twigs forming a dense green column that widens abruptly near the of the narrow

In 1983, a hurricane hit Kauai and stripped all the branches from the narrow-crowned A. columnaris and the wider-crowned suspected A. heterophylla. When the branches sprouted back, they grew to the same length from top to bottom of the trees, producing columnar crowns regardless of the original shape. Thus, shape may be a result of wind damage.

Norfolk-Island-pine, Araucaria heterophylla (Salisb.) Franco* (A. excelsa (Lam.) R. Br.) is a closely related species very similar in appearance. However, it has a wider of coarser foliage and when open grown tends to have much longer branches and a more pyramidal appearance. Mature cones are rounded and often broader than long, 3–4 inches (7.5–10 ) long and 3 1⁄2–4 1⁄2 inches (9–11 ) in diameter. Seeds are larger, with a swollen body to 3⁄8 inch (1 ) thick. Seedlings have 4 broad cotyledons 1⁄8–3⁄16 inch (3–5 ) wide. The species is native to Norfolk Island, which lies between New Zealand and New Caledonia in the South Pacific and is extensively cultivated in subtropical and tropical climates of the world and grown indoors in temperate regions.

Most trees called Norfolk-Island-pine in Hawaii, as well as seeds distributed from Hawaii under that name, apparently are columnar araucaria. Seeds of the two species are readily distinguished by size and the seedlings by cotyledon width.

In regular flowers all parts of the flower are similar in size and arrangement. Symeteric.